How do You Know When it's Time to Quit Your Day Job?

How do You Know When it's Time to Quit Your Day Job?

From side hustle, to passion project, to career... we speak to bosses who took the leap of faith, stumbled along the way, and strived for success on their own terms.

The creative project I started, just for fun, almost five years ago, has since led me to opportunities I never anticipated.

At first, it was something that I invested my time and money into, with no return, but recently my ‘side-hustle’ has begun to generate a small but substantial income.

I’m feeling hopeful about the prospect of my ‘hobby’ turning into a real job, but I’ve also found myself wondering: how do we know when it’s the right time for something to stop being a side project and become a full-time job?

Sienna Ludbey is the poster child of side-hustle success stories.

She started her business, HELLO SiSi (SiSi) in 2018, after dedicating what would have been her ‘Netflix time’ every evening to sewing handmade bags. Growing resentful of her day job in hospitality, she decided to quit without a plan, and challenged herself to focus on SiSi full-time.

The perfect time to do something doesn’t exist: embrace the idea of taking calculated risks.

"I was 25 and had been running SiSi for six months and I thought I'm just gonna give it a go," said Sienna. "I got my annual leave – about $4,000 – and went to Japan for a couple of months break. I came back dead broke, but I had all this fabric. Rent was due in a week, so I thought: let’s make bags. Full transparency, the first couple of years I made just enough to get by. But I was having the best time."

As an observer it appeared as though Sienna had managed to establish SiSi overnight. But in our conversation she revealed she’d actually attempted two previous projects that flopped. I asked her why she thought SiSi was the one that took off:

"SiSi was the first thing I tried that I did for myself, not going off what was trendy or cool. I think that’s why it worked," she explained. "It’s important to mention my ventures that didn’t work, because people often say: you're so lucky that HELLO SiSi did so well, but don’t know about the two or three other things [I tried] that didn't sell. I'm happy to admit that I have failed in the past." 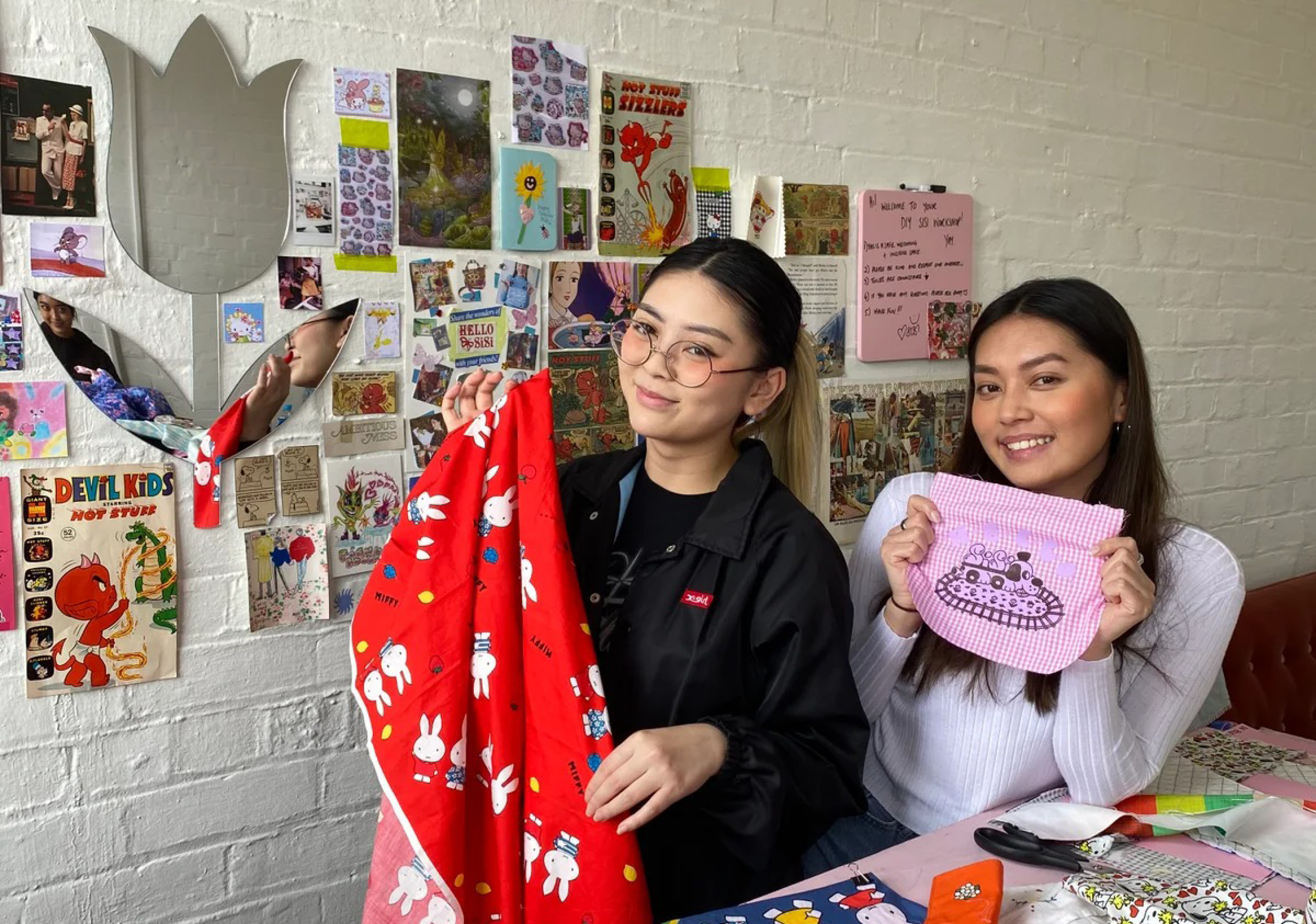 Trial and error is an inevitable part of the process

Being open to failure, success, and everything in between, is a valuable mindset to bring to any endeavour. For Ellie King, undertaking a range of projects led to her starting her ceramics business, Rittle King, which has now become her full-time.

She started out owning a cafe called ‘Little King’, which connected her with a creative circle of friends who were working from the nearby Nicholas Building.

From there she developed a practice in illustration, design and embroidery and then moved into her own studio, called ‘Homework’, where she and a friend came up with the concept for the illustrated ceramics Rittle King is widely recognised for.

Her mish-mash of projects were unrelated but trialing many different things allowed her to flesh out the work she liked the most.

"I spent four years going between full-time Rittle King and part-time jobs to subsidise income, Ellie said. "I was also doing vintage resale on Penny Lane (Facebook) and Ebay and realised I loved hunting things down, but I didn’t love selling. So it was always another means to an end."

Each new venture kind of ran its course, until "in the end [choosing what I wanted to do full-time] was kind of forced. With how much I was turning in a day making ceramics compared to [everything else]. I could weigh up [those factors and] my time spent, and realised I should be doing Rittle full-time."

[It’s funny how even though] I'd been doing it for six years it was the [interest from big retailers that made it feel legitimate].'

By believing in what you have to offer, other people will too.

Figuring out if you’ve got a good thing will come down to individual circumstances. However, as Kayla, of floristry business XXFlos, discovered – choosing to believe in the potential of your vision, despite the inevitable ups and downs, will always be a good place to start.

"[It’s important to take] ownership of your creative expression and [understand] how that influences your self esteem." said Kayla.

"When you're feeling really proud of where you're going, it’s a huge mood booster – you feel really strong. But [there’s also going to be] times when things go wrong."

"Even if you don't have the resources, [try to be] confident and make a start. I used to bring flowers home from my day job and play around making things every night. Overtime I got better and better.

"If you're showing the universe and the world around you that you're dedicated, and you're taking yourself seriously, people will start noticing.

"It's really hard to take ownership of an idea and go out there and show the world, but it’s the best thing I've ever done."

With so many lessons shared, I felt empowered to look forward to what’s probably still going to be an interesting journey ahead, instead of trying too hard to anticipate the unknown.

At the same time, it’s validating to know that ‘the right time to quit your day job’ is going to mean something different to everyone. Not just how profitable or scaleable our passion projects have become, but how those passion projects are fulfilling us, and of course what they can do for others.